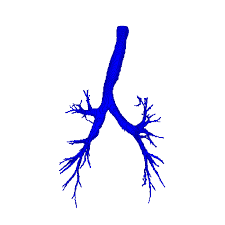 The pathogenesis of EIB is likely multifactorial and is not completely understood. The predominant hypothesis for the etiology of EIB is that breathing relatively dry air causes the airways to narrow by osmotic and thermal consequences of evaporative water loss from the airway surface. These stimuli have been demonstrated to cause cough and mucus production independently in patients without predisposing respiratory conditions such as asthma. The hyperosmolar environment created by evaporative water loss may result in the release of mediators such as histamine, which is a potent bronchoconstrictor, from mast cell degranulation.

During exercise, large volumes of air that are often colder than body temperature are exchanged. This large volume of air often overwhelms the ability of the upper airway to warm the air effectively, and, consequently, cool air reaches the distal airways. It has been suggested that cold air in the distal airways results in airway narrowing due to reactive hyperemia of the bronchial vasculature, and the subsequent increased hydrostatic pressures in the capillary bed lead to airway edema. Kanazawa et al found that increased airway vascular permeability correlates with the severity of EIB in asthmatic patients. These data suggest that vascular responses in the distal capillaries are likely to be involved in the development of EIB.

Inflammation also plays an important role in the pathogenesis of EIB in asthmatic subjects. Asthma results from a chronic inflammatory cascade that ultimately results in airway inflammation, mucus production, smooth muscle hypertrophy, and bron-chospasm. A significant correlation has been reported between the severity of EIB and the degree of peripheral blood eosinophilia and eosinophilic inflammation in induced sputum in asthmatic patients treated asthma with medications of Canadian Health&Care Mall.

Although inflammation is a critical component of asthma and EIB that occurs in asthmatic patients, the role or significance of inflammation in the pathogenesis of EIB in subjects without asthma is unclear, The term exercise-induced asthma is often used interchangeably with EIB; however, EIB that occurs in athletes without a history of asthma who have normal lung function may be a distinct phenomenon from bronchospasm occurring as a manifestation of asthma. While the relationship between inflammation and airway hyperresponsiveness in nonasthmatic EIB patients is not well-understood, some evidence suggests that inflammation is increased in the airways of subjects without asthma after exercise or hyperventilation challenge. Karjalainen et al measured mucosal inflammatory cell infiltration in the subepithelial basement membrane in endobronchial biopsy specimens of the proximal airways from 40 elite skiers without asthma. Biopsy specimens from the elite skiers were compared to biopsy specimens of 12 asthmatic subjects. The authors found that skiers had a greater degree of neutrophil infiltration, which is not typical in either atopic or nonatopic asthma. Furthermore, skiers had a lesser degree of infiltration with eosinophils, mast cells, and macrophages. These results suggest that the inflammatory process in these athletes may be different from that in asthmatic individuals. Larsson et al found that a short exposure to cold air while running induced an increase in the number of granulocytes and macrophages in the BAL fluid of healthy subjects. Repetitive hyperpnea itself has been shown to recruit eosinophils to the airways and to promote the release of inflammatory cytokines. Although inflammatory cells have been documented in the airways of nonasthmatic subjects, whether they play a direct role in the development of airway hyperresponsiveness in nonasthmatic athletes that experience EIB is not known.

Exhaled nitric oxide (NO) is emerging as a new technique that may help to identify subjects with airway inflammation. EIB is currently thought to occur in part due to vasomotor changes related to relatively cool air in the distal airways. Because NO has profound effects on airway and vasomotor tone, it may be intimately involved in mediating the thermal consequences of exercise. Kotaru et al demonstrated that during hyperventilation asthmatic subjects generated approximately 55% more NO per minute than did healthy control subjects, even though their level of ventilation was approximately 66% lower. In contrast to healthy subjects, NO production in the asthmatic patients continued into the recovery period after the challenge stopped, and the fraction of exhaled NO rose temporally as the airflow limitation developed. These results suggest that NO plays a significant role in the development of airway obstruction that follows hyperventilation, and the quantification of exhaled NO may help to identify athletes who are at risk for experiencing EIB.