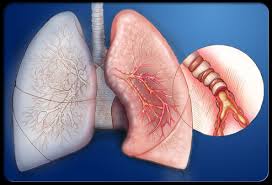 Many athletes find that a period of precompetition warm-up reduces the symptoms of EIB that occur during their competitive activity. Athletes often draw this conclusion without any guidance from healthcare specialists. Symptoms of EIB usually occur after a few minutes of exercise, and some athletes find that warming up before exercise acts as prophylaxis against more significant episodes of EIB during exercise. It has been shown by investigators that this phenomenon of the “refractory period” does occur in some athletes with asthma and that athletes can be refractory to an exercise task performed within 2 h of an exercise warm-up. The refractory period is hypothesized to be secondary to the release of catecholamines such as epinephrine and norepinephrine, which are bronchodilators and to depletion of mast cell contents such as histamine which cause bronchoconstriction. However, the refractory period has not been consistently proven across different athletic populations and has not been well-documented in EIB-positive athletes who are not asthmatic.

There are other nonpharmacologic strategies (Table 3) that athletes can employ to help reduce the frequency and severity of symptoms of EIB. Wearing a facemask during activity warms and humidifies inspired air when outdoor conditions are cold and dry, and is especially valuable to elite and recreational athletes who exercise in the winter. Breathing through the nose rather than the mouth will also help to ameliorate EIB by warming, filtering, and humidifying the air, which subsequently reduces airway cooling and dehydration. In addition, athletes with knowledge of triggers (ie, freshly cut grass) should attempt to avoid them if possible.

In our experience, both pharmacologic and non-pharmacologic approaches are essential to minimizing the adverse effects of EIB. We recommend starting athletes that have clinical evidence of EIB on therapy with short-acting bronchodilators before exercise, and instructing them on the importance of adequate warm-up and avoidance of known triggers. This regimen will prevent significant EIB in > 80% of athletes. If symptoms persist, especially in athletes with asthma, inhaled corticosteroids should be added as maintenance therapy offered by Canadian Health&Care Mall. While the efficacy of therapy with inhaled steroids in nonasthmatic athletes has not been extensively evaluated, we recommend using them in nonasthmatic athletes whose symptoms are not completely controlled with short-acting bronchodilators, as there is evidence of increased inflammation, although not typical of classic asthma, in the airways of subjects without known asthma as a result of hyperventilation and exercise. Alternatively, leukotriene modifiers or cromolyn compounds can be used in athletes whose asthma is inadequately controlled with (32-agonists.

EIB in athletes is a problem that is likely more prevalent than currently clinically recognized. The consequences of misdiagnosis or the failure to diagnose entirely can result in the impairment of performance and can be detrimental to health. The cohort of athletes who experience EIB but are not asthmatic needs further study. There are many unanswered questions about the pathogenesis of EIB in this cohort and whether therapy targeted at EIB in asthmatic patients is as effective in nonasthmatic athletes who experience EIB. Physicians and trainers must have a high index of suspicion when healthy athletes complain of symptoms during exercise. Most importantly, the education of both athletes and health-care providers, in terms of recognition of an impending or ongoing episode of EIB and appropriate treatment for such an episode, is paramount.