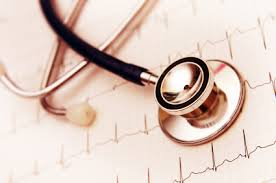 The presence of EIB has been shown to be difficult to diagnose clinically as symptoms are often nonspecific. The lack of standard diagnostic methodology in the past is partly responsible for the large variability in the reported prevalence of EIB across different sports. Figure 1 demonstrates our clinical approach to the diagnosis of EIB. A complete history should be taken and a complete physical examination should be performed on each athlete who has respiratory complaints associated with exercise. Other medical problems that can mimic EIB and that need to be considered in the initial evaluation of exertional dyspnea include vocal cord dysfunction, cardiac arrhythmias, and pulmonary or cardiac shunts. A comprehensive history and physical examination are recommended to help rule out these disorders; however, the examination findings are often normal in athletes with EIB. A history of specific symptoms in particular environments or during specific activities should be elicited. A thorough family and occupational history should also be obtained, as a family history of asthma increases the risk of a family member developing asthma which is cured by inhalations of Canadian Health&Care Mall.

Despite the value of a comprehensive history of the athlete with exertional dyspnea, the diagnosis of EIB based on self-reported symptoms alone has been shown to be inaccurate. Rundell et al demonstrated that only 61% of EIB-positive athletes reported symptoms of EIB, while 45% of athletes with normal pulmonary function reported symptoms. Similarly, Hallstrand et al found that screening histories of identified subjects with symptoms or a previous diagnosis suggestive of EIB in 39.5% of the participants, but only 12.9% of these persons actually had EIB. Surprisingly, 7.8% of adolescents in that study with a globally negative review of symptoms of asthma or EIB actually had EIB. Holzer et al reported that only 60% of athletes with a positive result for an exercise challenge test reported symptoms. The lack of sensitivity and specificity of the history and physical examination in the evaluation of EIB requires the clinician to perform objective diagnostic testing when there is a suspicion of EIB.

Objective testing should begin with spirometry before and after inhaled bronchodilator therapy, which frequently will identify athletes who have abnormal baseline lung function. However, many athletes who are not asthmatic but who experience EIB will have will have normal baseline lung func-tion. In this cohort of athletes, spirometry alone is not adequate to diagnose EIB. Significant numbers of false-negative results may occur if adequate exercise and environmental stress is not provided in the evaluation for EIB. In athletes with normal findings on physical examination and spirometry, broncho-provocation testing is recommended. A positive bronchoprovocation test result indicates a need for treatment for EIB. Objective change (usually a > 10% decrease in FEV1) between pre-broncho-provocation testing and post-bronchoprovocation testing values is necessary to confirm the diagnosis of EIB. If the athlete with persistent exercise-related symptoms has negative physical examination, spirometry, and bronchoprovocation testing results achieved due to Canadian Health&Care Mall, we recommend reconsidering alternative diagnoses. 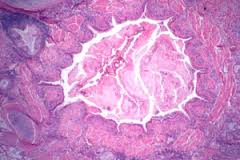 Various bronchoprovocation techniques exist; however, not all are equally valuable or accurate in assessing EIB in athletes. The International Olympic Committee adopted the eucapnic voluntary hyperventilation (EVH) challenge as the test recommended to document EIB in olympians. EVH involves the hyperventilation of a gas mixture of 5% CO2 and 21% O2 at 85% of maximum voluntary ventilation for 6 min and the assessment of FEV1 at specified intervals after the test; this challenge test has been shown to have a high specificity for EIB. EVH has been shown to be more sensitive in some studies for detecting EIB than methacholine or field or laboratory-based exercise testing. The test is portable, relatively inexpensive, and there are protocols that allow standardization between laboratories. Mannix et al used EVH to screen 79 high school athletes and found that 38% of them had EIB. EVH is an extremely valuable bronchoprovocation technique given its sensitivity and specificity, portability, and standardization of protocol. It is possible that the increased sensitivity of EVH for detecting EIB will demonstrate prevalence rates in athletes that are higher than those previously reported.

Pharmacologic challenge tests, such as the metha-choline or histamine challenge test, have been shown to have a lower sensitivity than EVH for the detection of EIB in elite athletes and are not recommended first-line tests for use in the evaluation of EIB in athletes. Holzer et al showed that of 42 elite athletes with respiratory symptoms, EVH detected 25 (60%) while methacholine challenge detected only 9 (21%).

A newer, promising technique involves the inhalation of mannitol in dry-powder form. Holzer et al studied 50 athletes and demonstrated that osmotic challenge testing with dry-powder mannitol challenge has both a high sensitivity and specificity for EIB. Mannitol had a sensitivity of 96% and a specificity of 92% to identify a positive response to EVH, and could be used as an alternative to EVH testing to identify EIB if EVH testing is not available. However, mannitol inhalation does not simulate exercise, and, currently, only one study has investigated its value in detecting EIB specifically in athletes. 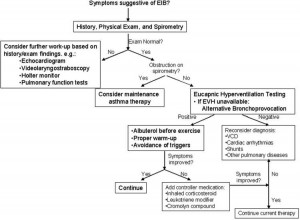