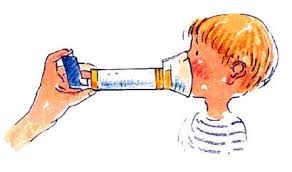 Although athletes who compete in high-ventilation or endurance sports (Table 2) are more likely to experiences symptoms of EIB than those who participate in low-ventilation sports, EIB can occur in any setting. It is especially prevalent in endurance events such as cross-country skiing, swimming, and long-distance running in which ventilation is increased for long periods of time during training and competition, allowing for relatively more evaporative water loss and subsequent airway narrowing. There is also increased prevalence of EIB in winter sports athletes, which is thought to be due in part to the increased cooling of airways and the relative increase in reactive hyperemia in the pulmonary vasculature. It is important for athletes, coaches, and trainers supervising athletes in these “higher risk” sports to be aware of the increased incidence of EIB in these populations of athletes.

Athletes who participate in environments in which there may be environmental pollutants are at increased risk for the development of EIB. Chlorine compounds in swimming pools and chemicals related to ice-resurfacing machinery in ice rinks may put certain populations of athletes at additional risk. Particulate matter and gases such as carbon monoxide and nitrogen dioxide, which are abundant in indoor ice arenas, and chlorine from swimming pools may act as allergic “triggers” and may exacerbate bronchospasm in athletes who are predisposed to EIB. Helenius and Haahtela showed a 96-fold greater risk of asthma in atopic swimmers when compared to nonatopic control subjects when atopy and swimming were included in multivariate statistical analysis. Leuppi et al found a 35% incidence of airway hyperresponsiveness in a group of ice-hockey players. In addition, figure skaters have been shown to have a high incidence of EIB.

Generally, an exercise duration of 5 to 8 min at a workload representing at least 80% of the maximal predicted oxygen consumption is required to generate bronchospasm in most athletes. Typically, athletes experience transient bronchodilation during exercise and experience symptoms of EIB shortly after exercise. Usually, symptoms peak 5 to 10 min after exercise ceases and can remain significant for 30 min if no bronchodilator therapy is provided. Even in the absence of intervention with bronchodilator therapy, many athletes will spontaneously recover to baseline airflow within 60 min. Athletes who experience symptoms for extended periods often perform at suboptimal levels for significant portions of their competitive or recreational activities.